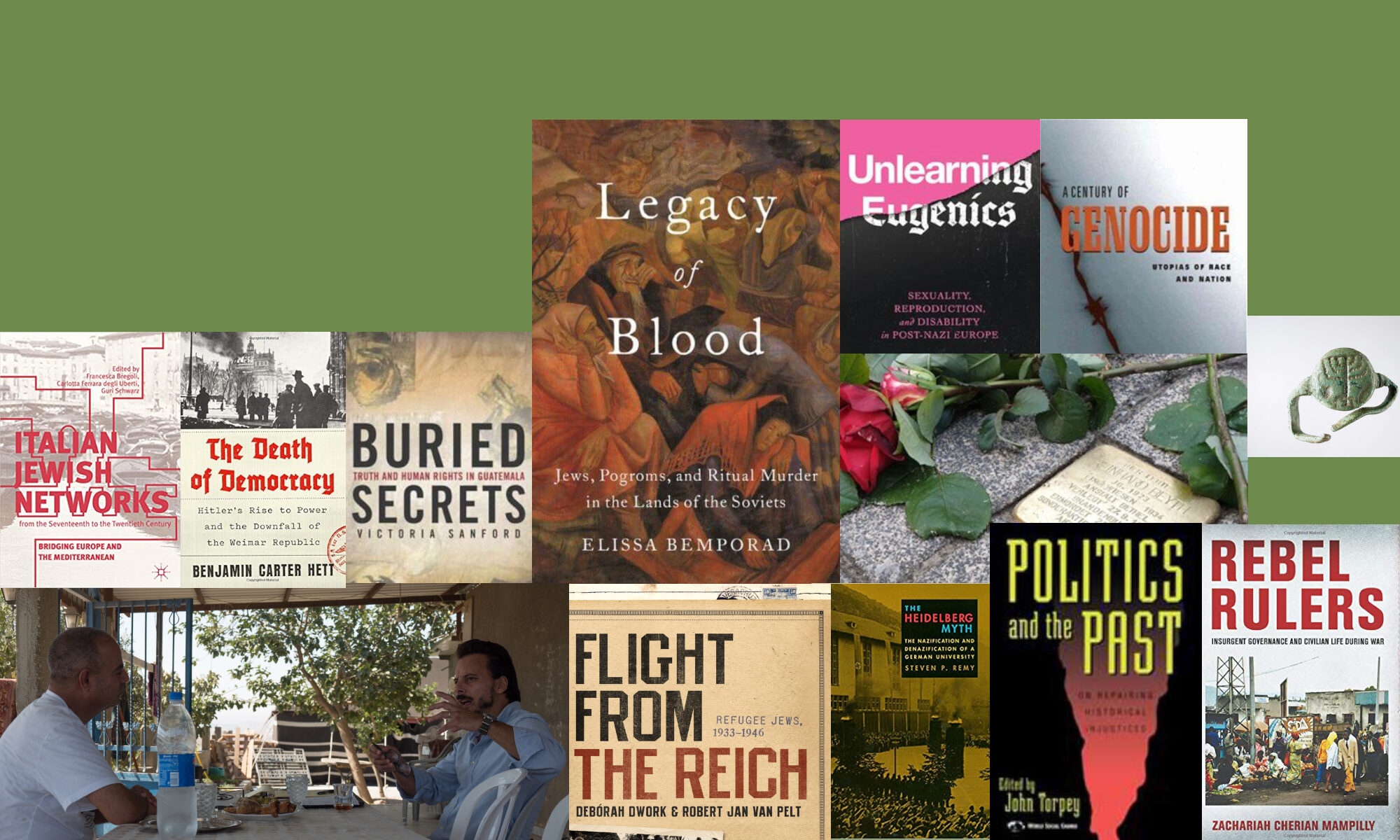 Director, Center for the Study of the Holocaust, Genocide, and Crimes Against Humanity, Graduate Center-CUNY

Areas: Holocaust history: specific focus on the history of the targeted Jews before, during, and after the Nazi years; their neighbors; and Jews and non-Jews engaged in rescue

Debórah Dwork is the founding Director of the Center for the Study of the Holocaust, Genocide, and Crimes Against Humanity at the Ralph Bunche Institute for International Studies, Graduate Center — CUNY. Pathbreaking in her early oral recording of Holocaust survivors, Dwork weaves their narratives into the history she writes. Her award-winning books include Children With A Star; Flight from the Reich; Auschwitz; and Holocaust. Dwork is also a leading authority on university education in this field: she envisioned and actualized the first doctoral program specifically in Holocaust History and Genocide Studies. Recipient of the International Network of Genocide Scholars Lifetime Achievement Award (2020), Debórah Dwork was honored to serve as Senior Scholar-in-Residence at the United States Holocaust Memorial Museum, and as a Guggenheim Fellow, a Fellow at the Woodrow Wilson International Center for Scholars, and an ACLS Fellow.

Areas: Jews of Russia and Eastern Europe in modern times; Mass Violence, Gender, and Trauma, Antisemitism and Jewish responses to (and involvement in) violence under the Soviet regime.

Elissa Bemporad holds the Ungar Chair in East European Jewish History and the Holocaust. Currently, Dr. Bemporad is Professor, Department of History at Queens College and the CUNY Graduate Center. She is a two-time winner of the National Jewish Book Award and author of Becoming Soviet Jews: The Bolshevik Experiment in Minsk (2013), and Legacy of Blood: Jews, Pogroms, and Ritual Murder in the Lands of the Soviets (2019). She is also the co-editor of two volumes: Women and Genocide: Survivors, Victims, Perpetrators (2018); and Pogroms: A Documentary History (Oxford University Press, 2021) and serves as editor of Jewish Social Studies. Elissa is currently finishing the first volume of the Comprehensive History of Soviet Jewry (forthcoming with NYU Press), and is at work on a biography of Ester Frumkin.

Francesca Bregoli is the Joseph and Oro Halegua Chair in Greek and Sephardic Jewish Studies, and an Associate Professor at Queens College and The Graduate Center, CUNY. Her research concentrates on early modern Sephardic and Italian Jewish history. She is the author of Mediterranean Enlightenment: Livornese Jews, Tuscan Culture, and Eighteenth-Century Reform (2014), and co-editor of Connecting Histories: Jews and their Others in Early Modern Europe (2019) and Italian Jewish Networks from the Seventeenth to the Twentieth Centuries: Bridging Europe and the Mediterranean (2018). She currently serves as director of the Center for Jewish Studies at The Graduate Center.

Dagmar Herzog is Distinguished Professor at the Graduate Center, CUNY. Her books include: Sex after Fascism: Memory and Morality in Twentieth-Century Germany (2005), Sexuality in Europe: A Twentieth-Century History (2011), Cold War Freud: Psychoanalysis in an Age of Catastrophes (2017), and Unlearning Eugenics: Sexuality, Reproduction, and Disability in Post-Nazi Europe (2018). Coedited with Chelsea Schields, the Routledge Companion to Sexuality and Colonialism will appear in 2021. Herzog is currently writing on the theology and politics of disability in twentieth-century Germany: In the Disability Murders Archive.

Benjamin Carter Hett is a Professor at Hunter College and the CUNY Graduate Center. He is the author of The Nazi Menace: Hitler, Churchill, Roosevelt, Stalin, and the Road to War, named an editors’ choice by the New York Times Book Review, and The Death of Democracy: Hitler’s Rise to Power and the Downfall of the Weimar Republic, winner of the 2019 Vine Award for History and named one of the year’s best books by The Times of London and the Daily Telegraph. His other books include Burning the Reichstag and Crossing Hitler, which was filmed for the BBC. Dr. Hett has been a recipient of fellowships from the Guggenheim Foundation and the American Council of Learned Societies.

Areas: Mass Atrocity Prevention; Indigenous Movements; Transformations in sovereignty, History of Zionism; and the struggles of the Negev Bedouin.

Eli Karetny is the Ralph Bunche Institute’s deputy director and serves as the head of programs and operations. He manages the Institute’s human rights research projects and is in charge of donor relations, grants and financial management. After receiving a JD/MBA from Temple University, Eli served in the Peace Corps in Ukraine, then received a master’s degree in International Relations at New York University before completing his PhD in Political Science at the CUNY Graduate Center under Corey Robin. His dissertation explored the pre-modern, monarchic and imperialistic themes in the work of Leo Strauss. Eli teaches political theory and international relations at Baruch College-CUNY and lives in Cold Spring, NY with his wife Taly, daughter Nomie and son Ma’ayan.

Zachariah Mampilly is the Marxe Endowed Chair of International Affairs at the Marxe School of Public and International Affairs, CUNY. Previously, he was Professor in the department of Political Science and Director of the Africana Studies Program at Vassar College. In 2012/2013, he was a Fulbright Visiting Professor at the University of Dar es Salaam, Tanzania. He is the author of Rebel Rulers: Insurgent Governance and Civilian Life during War  (Cornell U. Press 2011) and with Adam Branch, Africa Uprising: Popular Protest and Political Change (African Arguments, Zed Press 2015). He is the coeditor of Rebel Governance in Civil Wars  (Cambridge U. Press 2015) with Ana Arjona and Nelson Kasfir; and Peacemaking: From Practice to Theory (Praeger 2011) with Andrea Bartoli and Susan Allen Nan.

Steven P. Remy is a scholar of modern European and German history, with particular interests in the politics of memory, Nazi Germany and the postwar occupation, war crimes, and armed conflict in imperial spaces. He is the author of The Malmedy Massacre: The War Crimes Trial Controversy (Harvard, 2017), The Heidelberg Myth: The Nazification and Denazification of a German University (Harvard, 2003), and the forthcoming Adolf Hitler: A Reference Guide to His Life and Works (Rowman & Littlefield). He is currently writing a global history of war crimes. He has taught at Brooklyn College and the CUNY Graduate Center since 2003.

Victoria Sanford is Professor and chair of the anthropology department and founding director of the Center for Human Rights and Peace Studies at Lehman College.  She is anthropology doctoral faculty at the Graduate Center, CUNY.  Dr. Sanford authored of Buried Secrets: Truth and Human Rights in Guatemala (2003), Violencia y Genocidio en Guatemala (2003), Guatemala: Del Genocidio al Feminicidio (2008), La Masacre de Panzos: Etnicidad, Tierra y Violencia en Guatemala (2009), co-author of the Guatemalan Forensic Anthropology Foundation’s report to the Commission for Historical Clarification and co-editor of several publications. She recently won the University of California Press Public Anthropology competition for her latest book project –The Surge~Central American Border Crossings in the United States, 1980-2015. She is currently completing Bittersweet Justice: Feminicide, Impunity & Courts of Last Resort. She is recipient of many awards including the John Simon Guggenheim Fellowship, MacArthur Consortium Fellowship among others.

John Torpey is Presidential Professor – Departments of Sociology and History and Director of the Ralph Bunche Institute for International Studies at the CUNY Graduate Center.  He has written or edited a number of books, including The Invention of the Passport: Surveillance, Citizenship, and the State (1999; 2nd ed., Cambridge University Press, 2018); Making Whole What Has Been Smashed: On Reparations Politics (Harvard University Press, 2005; rev. ed. Rutgers University Press, 2017); and Intellectuals, Socialism, and Dissent: The East German Opposition and its Legacy (University of Minnesota Press, 1995).  His current research concerns the consequences of the tech revolution for social inequality and a comparison of the social aspects of the 2020 coronavirus pandemic with those of the flu pandemic of 1918-1919.